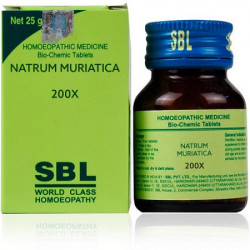 It is a mineral with an affinity for fluids, and as it is in nature so it is in the body. It is found predominantly in the extracellular fluids, in striking contrast with the potassium salts, which are mainly intercellular. From this position, it acts as a regulator of the transport and distribution of the body fluids. It distributes the water throughout the organism. An unequal distribution of water in the system sometimes causes excessive dryness of mucous membranes.

Hypersecretion of tears or vomitting of water and mucus.

It does not cure by supplying the amount of salt that the body needs, but acts to alter and restore the tissues of the body so they can assimilate (utilise) the body's needs for salt from food.

Crusty eruptions in bends of limbs, margin of scalp, behind ears.

Warts on palms of hands with dryness and sweat.

Eczema, skin disease with watery symptoms is an indication of Natrum Mur.

Pain in back, with desire for some firm support. Every movement fastens the circulation.

Palms hot and perspiring are well indicated for Natrum Mur.

Mental symptoms are increased before menstruation, and she may suffer from headaches, nausea , skin eruptions, weakness, back pains, heart palpitations, and pains in her abdomen and loins.

Sweats while eating is a marked feature in Natrum Mur patient.

The patient is frequently constipated. When stools do occur, they are dry and hard and often difficult to expel.