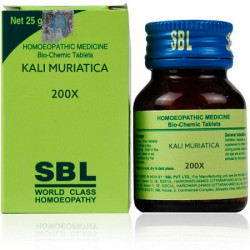 It is also known as potassium chloride. It is essential in the production of fibrin in the blood and when there is a shortage of it, a white discharge will be produced. It is found in muscles. Without the right balance of potassium chloride, the clot former/coagulant protein fibrin cannot be made, broken down or kept in proper solution in the body.

Complaints associated with white or gray coating of tongue.

Threadworms causing itching at the anus region is relieved with kali mur.

It is used for health conditions such as fatigue and exhaustion and glandular conditions.

Hemorrhoids that are bleeding, blood dark, fibrous, clotted is recovered with Kali mur.

Complaints with exudation (oozing of discharges) and swelling around the joints.

Cough affecting the eyes, sensation of eyes protruding out while coughing.

Whiteness of all the secretions, discharges, coatings.

Tonsillitis when the patient can ONLY SWALLOW by TWISTING his NECK is relieved by Kali mur.

Kali Mur is indicated in Children’s eczema chiefly when it occurs on the face.

Chief remedy in convulsions, especially if occurring with or after suppression of eczema or other eruptions.

It helps in thinning of blood and easy circualtion of blood.

Kali Mur is used for the second line of attack in any fever and it is most frequently combined with Ferrum phos.