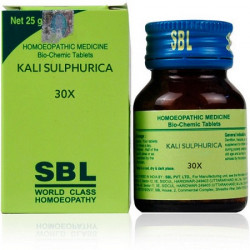 Kali Sulph (potassium sulphate) aids the transfer of oxygen and is important to our skin, mucus membranes and respiratory systems. Desquamation (PEELING) of cells of the epidermis and epithelium which have been loosened from their connection because they were not sufficiently provided with oxygen. It affects the access of oxygen and so facilitates the formation of new epithelium.

Breathlessness attacks which is more troubling in the evening time.

Eruptions about the eyes and on the lids.

Ring-worm of scalp or beard with abundant scales is an Indication of kali sulph.

Constant scraping in the larynx, comes up after eating, at night in bed, until midnight; wants to clear the larynx and gets up only white thick mucus.

Suffocative feeling in hot atmosphere, dryness in the nose.

Bleeding in morning on blowing. Itching in the nose.

Psoriasis, warts over lips; Kali sulph is remedy of service.

Painful warts is an indication of kali sulph, ulcers on legs.

Arthritic nodositities with eruptions on legs, pimples and vesicles on limbs.