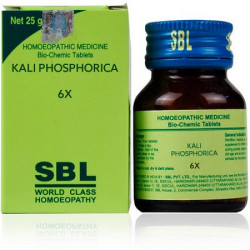 Kali Phos is present in the cells of the brain, nerves, muscles, blood (corpuscles and plasma), and intercellular fluids. A disturbance in the motions of its molecules produces despondency, (low, sad feeling) anxiety, fearfulness, tearfulness, home-sickness, suspiciousness, weak memory. Small and frequent pulse, later retarded. Pains with sensation of paralysis. Weakness of muscles and nerves even to paralysis.

If you lack energy, throughout the day and need energy, use Kali Phos.

Helps to restore the nervous system after overwork, Kali phos is believed to be a nerve nutrient.

Humming and buzzing in the ears.

Menstrual headaches, Students headache that is relieved by motion is indication of Kali phos.

Cramps in thighs, calves and soles. Heaviness of upper limbs, lower limbs and feet. It is helpful in hip joint disease.

Numbness of the limbs, upper and lower; hands and finger tips, feet and legs is relieved by Kali phos.

Paralytic lameness in back and extremities.

Stress that needs a clear mind, such as before an exam or presentation Kali phos gives good results.

Pains felt most when quiet or alone, when not occupied.

Night terrors in children who suffer from enuresis( bed wetting), bleeding from the urethra.

After removal of cancer when in healing process skin is drawn tight over the wound.

In girls who have late puberty, no menses till the age of 18, helps in starting and increase the blood flow during menses.

Constipation with difficult passage of stools.